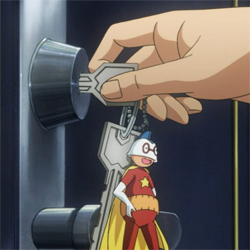 It would probably be a lot of fun hanging out with those guys.

Thanks to midterms and a less enthusiastic end to the first episode I ended up leaving this episode on my hdd for sometime without wanting to watch it. Once I finally got to it I was surprised about how much I enjoyed the episode. Maybe my initial expectations were too high or I thought I was going to be watching something different, but I started to really like watching the show. I think the interactions between Akito and Moritaka are becoming better, which is making the show a joy to watch. When they went into the nurses office and then went to the roof to talk I felt like there was a real interaction between the two main characters. His uncle must have done real well for himself if he was able to afford such a nice studio.

Episode 2 was great because it really jumped into the reality that Moritaka had to face, telling his mother and father he was going to be a manga artist. I thought there was going to be much more of a fight. I was shocked that his mother gave in so quickly. She pressed hard on him both times when he wasn’t even studying for his exams, but on this life changing decision she folded easily. Maybe it was just that Moritaka had a different image of his parents and when it came down to it they were far more supportive than he ever thought. I loved Moritaka’s reaction when his grandfather just handed over the key to his uncle’s studio. I think more so that Bakuman does a great job in showing how teenagers are surprised by their parents supporting their decisions in life. I know I have had several experiences with the same thing and felt this anime was speaking directly to me. Also the end scene was great him running through the streets really gave a sense of excitement that was great to watch.

Episode 3 started off with Moritaka and Akito making their way to their new studio. That scene was great with the two of them excited as all can be when seeing all the stuff he had collected. I really knew nothing about writing a manga, I had the just, but learning about how manga writes first come up with a “Name” was very interesting. I hope this series does a good job in explaining the steps, because I am very curious about how the process works. Their excitement about working on the manga also sparked a curiousity in me about what kind of manga they will create. Personally, I found his uncle’s manga uninteresting, but I hope their manga is something really great, that we could see spinoffs of. Much like how Genshiken had a Kujibiki Unbalanced spinoff. I need a hug too~

I will say as Bakuman unfolds I am definately becoming more interested in the series. I read that this is only going to be 25 episodes, so it might be a series worth checking the manga out after it is done airing. I can’t wait for the next episode and hopefully an impression will be out much sooner for it as well!