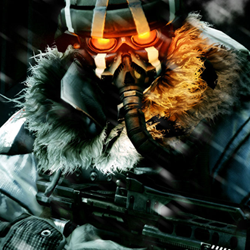 As the beta ended and the game gets set to come out the 22nd of this month, the Killzone 3 beta really helped me to determine whether this game will be a purchase for me or not.

I Feel Lighter
The most important thing for me was how the game’s controls felt. Digital Foundry did studies on input lag during the early Killzone 3 beta and found that the lag time was 116ms, which is 33ms faster than its predecessor, Killzone 2. That doesn’t seem like a big difference in writing, but as soon as I started playing the game and looking around while aiming down my sights, I could tell that the game had more “twitch” to it than Killzone 2 ever did. For a guy that’s spent considerable time playing Call of Duty games the past few years, it’s interesting to me how a seemingly mere 33ms improved my opinion of how the game felt. When I played Killzone 2, I tried my best to tweak settings and make things faster, but I always felt a little too heavy. I understand the difference between heavy and light is of personal preference, but I’m willing to bet a number of CoD fans that gave Killzone 2 a chance weren’t too fond of feeling heavier than they’re used to.

In addition to decreased input lag, Killzone 3’s standard control configurations remain as customizable as they did in Killzone 2. Call of Duty aficionados will want to change the config type to “Alternate” for more familiar controls. Shooting and reloading by default are relegated to R1/L1, and while you can swap the L&R buttons to make L2/R2 to shoot and reload, I wasn’t too keen on pushing the trigger-like R2 for shooting purposes; it just felt more comfortable to me holding R1.

Oscar Mike
I also was very interested in how Killzone 3 would play with Move controls. For so long, I’ve loved Metroid Prime 3’s control scheme and I wanted a hardcore game that could further improve upon what Retro Studios did with Prime. I’m glad to report that, not only are Move controls good in Killzone 3, I see them as my primary way of playing the game. The controls are easy to calibrate and are equally as customizable as the standard SIXAXIS controller. I turned the dead zone (the invisible square in which, when your reticle is inside it, your character will not turn their head) to an almost non-existent 10%; I was able to increase my turn speed, and I also increased the sensitivity of the Move controller a small touch. You can also have the crosshairs and camera lock on to your enemy, but I would suggest playing with lock-on turned off. Not only can having lock-on cause moments in which you might not be locked on to who you want, it’s almost a downright cheat of sorts and I hope other game modes in the final release disallow the use of auto lock-on. Heck, I think there should be Move-only lobbies. This game along with Dead Space Extraction is finally getting me excited for games with Move functionality.

There are some Move-based controls which do feel awkward. To melee, you must thrust the Move controller forward. It’s not horrible, but it is a weird thing to take what essentially is your aiming device and push it forward while potentially changing your orientation, especially if your settings are extremely sensitive as I set mine to be. The other awkward motion is for reloading in which you must shake your controller in a circular motion. It’s quite unsettling to see your gun go haywire in an effort to do a simple reload. Pressing the Square button serves the same purpose, so I definitely suggest that over shaking your aiming device. And one more thing worth mentioning is your perks. They are mapped to the D-pad on the subnavigation controller, which isn’t easy to get to while you are moving with the analog stick located directly above it.

Classes
Excuse me for not fully researching Killzone 2’s multiplayer, but in Killzone 3, you can choose different classes to play as and level up. Each class has its own specific weapon set and two perks. Perks include a UAV radar which not only shows enemies in your on-screen map, but also pinpoints their exact location by labeling them with blue circles; other perks allow you to disguise yourself as a member of the opposing team, brief invisibility and the ability to build your own turret. While the perks don’t allow for heavy customization ala Call of Duty, it puts just as much an emphasis on how you approach a multiplayer match. As you gain levels, you are given unlock points which can be spent on a new weapon or an increased perk (perks go by + and ++ as they increase).

Warzone
One more thing worth a mention is the Warzone game type. Warzone was a part of Killzone 2 I believe, but man, I wish all FPS games would combine game modes into a playoff-like format the way Warzone does for Killzone 3. Take Deathmatch, Search and Destroy, VIP and other game modes and make a Best-Of-7 series out of them, and you get Warzone mode. I love how the game type doesn’t take a break to switch sides and how it seamlessly moves from Bodycount to Search and Retrieve and other game types.

The Helghast Edition of Killzone 3 is a pricey $129 that not only includes a Helghast helmet and throwback maps, but also access to the Socom 4 beta. I’ll just opt for the $59.99 game, but the Helghast edition is one that big time Killzone fans should consider.