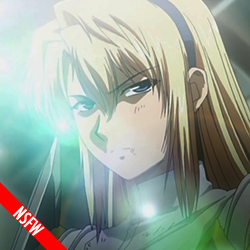 It’s a battle between a couple 3rd years and a couple 2nd years. Blood, ripped tops and creepy stepbrothers… ah Freezing, you are some kind of anime! Starting off the episode the right way.

Before the excitement that is the Annette/Creo vs. Satella/Rana fight, I’ll start by touching upon the past of one Satellizer. She is the daughter of Howard Satellizer and Noelle Allouache, a child that Howard had while married to Olivia Satellizer. So as unfortunately a lot of parents seem to do with children that aren’t exactly theres, they treat Satellizer like shit. Louis takes the cake in being an ass, as he rides Satella like a horse, and as the two get older, he seems to take advantage of her sexually. God bless Violet for being there, or Bridget we be completely FUBAR by the time she got to Genetics (if she ever did). It’s just a shame that Bridget’s situation lasted for a few years, and she had a drugged up mother that really couldn’t say much more other than, “just deal with it”. I wish there would be a bonus episode where she'd go back and slice Louis' balls off.

The action returned moreso to the way it looked in episode 1 and toward the end of episode 6. Cuts were being made, blood was visually at its best in the show so far, tops were being ripped off, and more importantly, tempest turns and accels were in full effect. I’m not sure if I either haven’t noticed it before or if this episode just did a better job if it, but I actually could kind of feel the impact of attacks. Anette hitting Bridget in the back of her head with the Sycthe Machina was particularly painful to see. In the manwha, I didn’t read Annette as a cutesy type, so Yuu Asakawa’s delivery of Annette threw me off a bit. It’s difficult to really catch the sense of speed and use of sound effects that episode 7 did, but I’ll give it a try here. Annette doubles up on Bridget, ripping clothes off in the process. She looks like she could use a burger right about now. Dammit... WTF is that thong made of? Rip out her stigma? In another situation where I ask, “what is the matter with this school?”; hazing is one thing, but if I went to Genetics, I would imagine that ripping out stigma would be an offense worth expulsion. In a world that could be attacked by Novas at anytime, the difference between “teaching a lesson” and downright removing one’s stigma which gives them strength to fight is quite over the top for Atia. Chiffon coming in and setting the 3rd years straight with her Illusion Turn was really cool and is definitely cooler than the two teachers coming in, so I’ll take that over some boring disciplinary action. We all should, really. I think at this point, I’m jumping off of the bandwagon I made for myself regarding the whole in-fighting situation. Fight on ladies! Shed blood, make it look really cool, and more importantly, rip clothing off. Lesser is Better! </weird pervish rant against and for thyself> Elizabeth Mayberry is essentially the lead in all this hazing, and Chiffon talking to her was really puzzling. It doesn’t seem like Chiffon is in support of her actions, but she doesn’t exactly tell Mayberry to stop. And with a mention from Sister Margarite that these peaceful days might be interrupted, the Novas might be making a return and Liz might need to take a break from her concern about Bridget and the 2nd Years. From a clearly perverted standpoint, I love how the anime makes Elizabeth into a girl who loves swimming naked. In the manwha, she just hangs out at a movie theater while talking to Chiffon, but this is some sense seems more like Elizabeth to me… or at least that’s what I think… I like listening to Justin Bieber, I have his poster on my wall, I ... oh shit, you're actually reading this.

The next episode looks to be a “calm before the storm” type situation, and now I’m getting more of a sense that Freezing is a 1-season only show. I wouldn’t expect things to end exactly conclusively and I don’t expect the show to get a sequel series in the next two years along the lines of Sekirei or something like that. If there were plans to go on longer, episodes 5-7 could’ve been episodes 5-10; fights could’ve been stretched out, more words would’ve been exchanged, etc. But the positive side to this is that the fights have been really fast-paced and really fun to watch. "That was a rough fight, Satellizer. Let's hit the showers." - Rana (and me, and you)

Breast of the Rest: