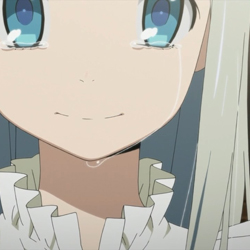 When I was thinking about which shows I might blog for the Spring season, Ano Hi Mita Hana no Namae wo Bokutachi wa Mada Shiranai, aka Ano Hana, really stood out to me. I loved the characters and the expressions that they had. The story seemed like it was going to be particularly powerful and have a strong focus on character development. If you were to ask me the thing I like most when it comes to anime, it would be the characters and powerful characters can help drive a strong story. I am looking forward to how this anime develops because the first episode hooked me right away. I will be trying out a slightly different blogging style since this will be the first serious drama I have ever blogged so I want to keep that same kind of feeling when I write up a blog about it.

Right from the start we get introduced to Jinta, an agoraphobic high school shut-in who is obviously suffering from some kind of great stress. It won’t be till a few minutes later that we start to understand what exactly is going on. We are introduced to Menma, who Jinta is trying to ignore, but her child-like personality keeps trying to push herself onto Jinta. Once we meet Jinta’s Father we start to get the picture that Menma isn’t really there, but really an apparition that only Jinta can see or interact with. That is when all the pieces start to come together. One thing I really liked about episode one was that it didn’t actually tell us she died until the end. While it was an obvious conclusion, it kept the actual spoken truth of it for the end of the episode creating an emotional scene for us the viewers to connect to and feel some real pain on behalf of Menma and the rest of her friends.

What is going to make or break this series are the characters and how they are all interconnected to each other. Personally I fell in love with Anjo’s character. She is your stereotypical tsundare character, but it was the little things that made me like her. I liked how she was kind of the nerdy girl when they were growing up, but now she is the fashionable gal girl. I also liked how she dressed up and put on special nail polish to just deliver him papers. A lot of this series will be about the relationship between the characters. There is a obvious tension between Jinta and Matsuyuki as they both had feelings for Menma. I am also interested in how the Jinta and Anjo relationship will develop. Poppo is also a very curious character as well. He seems like the bubbly care free guy, but I wonder if the trauma turned him into the person he is today.

One of the things that attracts me most to this anime is that not much is said by mouth, but by the expressions of the characters, like understanding how Anjo felt toward Jinta. As the anime progresses, I hope they rely heavily on that because it gives the anime a dynamic understanding for the viewers. That creates more debate and discussion about what is really going on. The best scene that embodies this is when they are in the shed and Jinta is asked whether or not he likes Menma. The complicated emotions of everyone was brought to light just by looking at their expressions and reactions to the question alone. The hurt expression of Menma after he turned her down and the reaction of Jinta had after he saw her was enough to make me want to see even more.

This really is one of the most interesting shows of the new season. There is a lot we don’t know, like: How did Menma die? Was Jinta in anyway involved? How did Jinta become a shut-in? What is Menma’s wish? Why did Poppo not go to High School? How did Anjo become a gal girl? There are a lot more questions unanswered and I really do hope Ano Hana does a good job in not only answering, but also delivering a character driven story that pulls us all in. Maybe I am asking for too much, but either way I am excited to see episode 2.