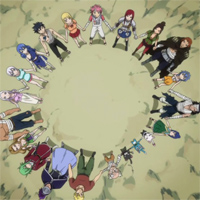 I'm not going to lie, I would definitively sit on Juvia... All I can say about this episode is WOW! This episode doesn’t give me a lot to talk about, but it is easily the biggest episode so far in the Fairy Tail series. Watching the entire Fairy Tail guild try and defeat Acnologia was pretty epic. It was amazing to see how overwhelmed they were, especially when you consider the fact that they are the strongest members of Fairy Tail. I did find it curious that is the same Dragon that Gildarts ran into. It seemed like it was awaken by Zeref, but I guess it has been roaming around secretly for a while. I did kind of hate the whole “go on without me speech” from Makarov since they all turned around after he held Acnologia off for a bit. I doubt they could’ve escaped anyway, but it still seems like what Makarov did was in vain because of it. I do hope that Laxus going back to finally gets him back into Fairy Tail. It seems stupid that he has to “die” to get back in. He already put his life up when he protected everyone from Hades. Even with me knowing what was going to happen next and just knowing that no one in their right mind would kill off their entire cast like that, I still got a bit teary eyed with them getting into that circle. It was a really great moment and it just stirred me up a bit.

Yes! Run away and make it out of there alive so Makarov's sacrifice won't be in vain! Oh, nm.. Come back and face a Dragon that will definitely kill you all.

I am amazed at the seven year time skip. I’ve seen plenty of time skips before, but seven years is quite a bit. I am excited that it is that long because seven years will change the world dramatically. Even if you track back to 2005 and look at how much the world has changed you’d be surprised. Facebook was only a year old at the time and didn’t have nearly the amount of users it had. So I’d imagine even in the Fairy Tail world this will promote drastic changes.  Before I say anything else, I do want to warn people that I will be giving off a bit of a spoiler about what I learned about the time skip. What I learned was that not only are the guys coming back, which is kind of obvious, they are coming back the way they left. That to me is the greatest and most original idea of a time skip that I’ve ever seen. Having the group come back like they had only just finished the S-Class trials will prove to be very cool. Not only does everyone think they are dead, but they will have a new world to discover. Needless to say I am excited about next week’s episode. I am curious about how all of the other characters will look. I kind of figured out who the boy was that we saw at the end of the episode, but I’ll let you figure that out for yourself. What exactly is he looking at?

For more images, check out our Google+ Gallery: [spoiler]KPICASA_GALLERY(FairyTail122)[/spoiler]