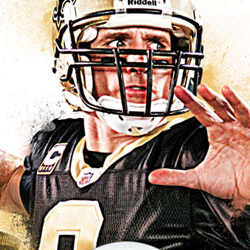 Simpler. Quicker. Deeper. In an effort to make the game easier for casual fans, this is Madden NFL 11’s primary focus. Have they made a football game that everyone can play, or are question marks still floating over grandpa’s head?

The locomotion mechanic makes you feel the difference between dash and smash-type RBs.

Gameplay tweaks are a hardcore Madden fan’s main point of interest each year, and I’m happy with a lot of what they’ve done. I can’t begin to express how big a fan I am of the improved blocking schemes for Madden NFL 11’s run game. I remember back in Madden NFL 09 when running the ball was an absolute bitch on even the easy difficulty; it’s so refreshing to see a fair and balanced blocking scheme put in place for Madden NFL 11. I use to never run toss plays because they just about never worked, but now I can call it with some confidence. This will really make you responsible for what you run and finding the right holes. This also brings up the locomotion mechanic. It’s been experimented with before, but this year, you can literally feel the difference between running backs and other players.  Chris Johnson (of Tennessee) will run like Chris Johnson (light and fast) and Brandon Jacobs (of New York Giants) will run like Brandon Jacobs (strong and hard-nosed).  Onto the WR Divas, they’ve improved sideline tip-toe catches, and the End Zone fade routes are now possible to achieve. I see Peyton Manning and Reggie Wayne do it a lot in the NFL; it’s great that I can now imitate that more appropriately in Madden. And while some things such as the lack of turbo may seem like they’re gone, just check the options screen from the main menu – they’re still there for you to utilize.

Mark Sanchez consults with Rex Ryan on the next play. Push A to reveal play.

Gameflow is a new addition to Madden NFL and a big selling point for the “Simpler, Quicker, Deeper” label on the back of the box. It’s kind of like choosing a random play, but with a formula that’s meant to fit your team’s playstyle (i.e. the Colts are going to be a pass-first squad while the Jaguars might be more run-centric). This is great for people that love seeing Madden but cannot play because of the enhancements to the games over the past 20 seasons that could only add to one’s confusion. GameFlow is fun to use as it speeds up the game, and at any time you can go to the full playbook for the traditional 3-square playbook. Even though it’s called GameFlow, it doesn’t really understand the time on the clock and the situation at hand. If I’m winning near the end of a game and could just take a knee, it should dial that play up for me.  Instead, it wants to stick to the run as a way to get the time ticking down. Also, GameFlow calls Streaks (straight routes for all WRs) a tad too often.  GameFlow is available for both offense and defense, but I recommend sticking to traditional playcalling for defense because having the proper package is important when it comes to coverages. You can actually use the new Game Planning feature to work in conjunction with GameFlow to design your own offensive scheme. All in all, GameFlow is an overall welcome addition and I hope it becomes a mainstay of Madden NFL, but it will need some tinkering.

What doesn’t work is the Strategy Pad, and the folks at EA Sports have mentioned a patch is in works to bring back the old method of changing routes, zones, etc. It was probably meant to be simpler, but it actually made it one extra button press. The presentation of it is all well and good, but I actually prefer how it’s displayed in NCAA Football 11, with everything on the bottom of the screen to make changes. Similar to my thoughts on GameFlow, Strategy Pad is more problematic on defense than offense. Opposing offenses snap the ball almost right away, which gives you very little time to make adjustments pre-snap. The exciting playcalling of Gus Johnson can now be heard in Madden NFL 11.

Last year’s big improvement for Madden was art direction. This year, presentation gets some love as Madden welcomes Gus Johnson to the booth alongside Cris Collinsworth. This guy really, really gets into the game. Watch the games he calls during March Madness or on the NFL on CBS; I seriously can’t put enough exclamation marks to illustrate the guy’s enthusiasm. He truly is above all else, and it made a Cincinnati Bengals victory last season more exciting for me. Anyways, Gus is welcome in the booth, dishing out exciting touchdown calls or just the way he says a player’s name is enjoyable. He’s only limited by the technology of Madden NFL, so don’t expect a call from him like in that Gonzaga/UCLA basketball game where Adam Morrison weeped like a child.

The experience of watching the game your playing has also improved.  Camera angles focus in on your running back as you break a long run, benches look more like benches and it seems like some players have received special attention in their looks without the helmet on. The funny thing is that every QB looks like they have linebacker shoulders even with a nice suit on, and Peyton Manning’s face in Madden is just tough to look at. I also really enjoy the mode dedicated to Super Bowl XLV, which puts the full presentation of the big game in an easy exhibition mode. How the post-game party plays out is really neat; you even get to meet President Obama. I still have an issue with how injuries are displayed. We see guys getting injured and hobbling off the field by themselves, other players helping out; that’s not what I see every Sunday. I always see trainers out there in a heartbeat to tend to a player on the ground. So much about presentation has been improved, but injuries aren’t like they are on television.

There are a couple new modes in Madden NFL 11. Online team play allows up to 3 vs. 3 multiplayer, so you can choose between a QB, RB, or WR/TE on offense or any player on defense. It’s great to have friends play alongside you rather than always against you. Madden Ultimate Team is a mix of card collecting and gameplay, as you collect “cards” (players, playbooks, uniforms, etc.) and compete against either the CPU or online. It’s an interesting alternative to the franchise mode, since the focus is to put Peyton Manning, Randy Moss, Patrick Willis and Darrelle Revis on the same team. And on the subject of online, a new online scouting feature allows you to look at scouting reports of your online opponents. You can look items such as run/pass ratios to see if your opponent runs their offense like Andy Reed and other info to prepare yourself for someone like Jrow GwF.

I really enjoy this Madden game. The combination of last year’s artistic style with this year’s focus on presentation is making Madden NFL 11 a very fun time for me. I admittedly have never been to big on Madden’s career-type modes, but I’m liking the Ultimate Team format. Sure, I start with some duds, but eventually I’ll get Tom Terrific handing off passes to Adrian Peterson. This game is excellent, and while football fans should definitely get it and team up for some online team play, the average anime fan reading this won’t be a sports nut like yours truly.