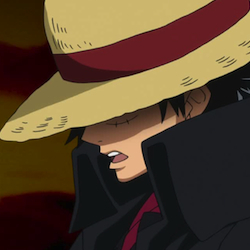 While Eiichiro Oda has been a consultant for One Piece movies in the past, Strong World (aka One Piece Movie 10) is the first one he has written the script for. The One Piece movies aren’t too bad across the board, but with Oda authoring this movie himself, can Strong World rise above as the best of them all? That tiger just got totally Concasse'd!

This movie takes place between the Thriller Bark and Sabaody Archipelago arcs, and there’s actually quite a bit of lead-in to this movie. Episodes 426-429 of the anime served as a lead-in to the movie and moviegoers in Japan scored a Chapter 0 manga, which depicts the events of 20 years before the start of One Piece, when Gol D. Roger and “Gold Lion” Shiki were bitter rivals. Chapter 0 was animated and titled Episode 0. It’s very rare to see a shounen anime movie get this kind of treatment pre-release.

Surely, this will factor in later on in the film.

After losing to Roger and spending some time in Impel Down, Shiki has escaped the infamous prison and is now planning to make the Government surrender to him by terrorizing all of East Blue, home of Luffy and a few other Mugiwara Pirates. Shiki and his band of baddies are really a weird bunch. Shiki has a couple of weird comedic moments and it feels really awkward considering this man once rivaled Roger; why is he in a dance sequence? His sidekick, Dr. Indigo, is a more humorous character as he walks around with squeaky shoes and often does a funny dance to let Shiki know what’s going on. Scarlet the gorilla is a nothing character who doesn’t add anything. While the bad guys can’t buck the trend of uninteresting movie villains, where the movie does succeed is on the kid character, Xiao. Most of these kid-type characters are unbearable, but Xiao is a nice character and she isn’t as whiny and also isn’t as central to the story as other kids have been in One Piece movies. Another movie character is Billy the Bird, an enhanced animal who helps the crew in the film has some fun moments.

Zoro's considering cutting off his legs and trying this "Swords For Legs" thing out.

The main plot of this movie is about Shiki wanting to make the World Government surrender by launching a full assault on East Blue. Shiki’s ability is to make any non-living thing he touches float, and with the islands he’s collected and a plant called IQ (which has been enhanced by Dr. Indigo and dubbed SIQ), he plans to enhance his animal kingdom and have them run wild over East Blue. Um… is this guy not familiar of the Shichibukai or the Admirals? Could this plan really work? I think there could be something as to why attacking East Blue would be such a big concern to the Marines, but it isn’t explored enough to make it believable, especially when the film’s big sell is that Oda wrote it himself and that it’s canonical to the series. Oh, and they were right in not spending any extra time on why the “rejects” of the island had wings on their arms. I’m not sure why they needed some tacked-on special trait to them. Nami somewhat takes the role of the featured Mugiwara character in this film as Shiki wants himself a sexy navigator lady to guide his ship after Nami had warned Shiki’s crew of a cyclone they didn’t even know was coming. Nami gets kidnapped, which gives this movie shades of the Arlong Arc from way early on in the series. That’s not totally a bad thing considering that’s when most people say One Piece kicks into high gear, and the situations in the film make it feel different so that it’s not a copy-and-paste plot from that arc. Nami has become quite a force in the series as of recently, but here she doesn’t really get an opportunity to kick butt. Nami’s sex appeal definitely is on display in the film; stay tuned for some more shots of Nami later on. The Main Force has arrived and looking pretty slick.

The rest of the crew is great to watch (as if they ever weren’t). Brooke makes his introduction in the film series and has some awesome sword-sheathing moments, Zoro and Sanji have their usual awesome moments in battle, and Luffy brings his more serious side to the movie. The crew dresses up in formal suits in the action-packed finale of the film, and everybody in the crew looks cool in their suits carrying guns into Shiki’s quarters. Never could I have imagined the Mugiwara Pirates walking into a room going guns-a-blazing; it’s an awesome scene to take in. There are some humorous moments, but not enough to give more than a sentence to the comedic value of the film. The animation & action in this movie are excellent and easily the best traits of the film. The early battles with the crew vs. the animals were fun, and the battle sequences in the end of the movie look spectacular. Dr. Indigo’s ability vs. Zoro looked really cool and Luffy’s Gear Second had less gray smoke and more of a red glow and looked amazing in the snowy-looking night sky. The moments the film uses CG are pretty easy to spot, but they do look great and fit in fine with the film. The art is top notch, as the floating islands looked phenomenal and so did the greenhouse that they kept the IQ in, the genetically enhanced animals were great looking and Shiki had swords for legs. Cmon, that’s pretty cool. A reindeer in a robe and a smoking skeleton. This is One Piece, alright.

This One Piece film stands above the rest for its animation and action scenes. Oda being the main guy actually doesn’t pay off as much as you think it would (it did for sales in Japanese theaters, at least), but he puts his money-making, children-feeding characters in a situation that’s fun for everyone to watch. Most people will gravitate to this as their favorite One Piece movie with a few sticklers holding onto a Movie 6 or some other movie as a sentimental favorite. I for one declare this my favorite One Piece film and might rewatch it again soon.

And now, as I promised, some great shots of Nami from the movie.