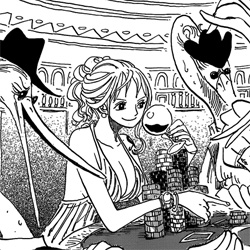 Seems kind of obvious that if you impersonate someone strong they will send strong people after you..

There isn’t really a whole lot to talk about this week. Things are finally coming together enough to were next week should probably be the week Luffy and the gang will officially reunite and start heading to Merman island, even if it isn’t until the end of the chapter. Even with the Pacifistas showing up and rampaging, in the end they were only fighting no-named pirates. Just ones that were created to be defeated. I feel like it was much too drawn out too, even having several blocks dedicated to pissed off pirates angry that they were following such a pathetic pirate and pirates that were blown away at just how strong the Straw Hat pirates are.

This week we finally get a Luffy reunion as he catches up with both Zoro and Sanji. The strongest 3 team up and take down some Pacifistas like they are nothing. I loved how Luffy was able to dodge the laser, giving us a glimpse into just how much Luffy has progressed. Plus, being that the Pacifista units were also very strong that it took all three of them to take down before and now even Sanji can deal with one like it is  nothing really made a statement that they are no on the world level of strong. I would love to see a big Shichibukai and Admiral battle versus the Straw Hats. I can’t wait to see how strong the others are and what kind of bounties they will get in the future.

Cutting a Robot in Half > Breaking a Robot's Neck

I am a bit disappointed though in the chapter. I was hoping for a stronger show of power, I know one hit K-Oing a Pacifista is like incredible, but in the end they are just robots. I want to see a Haki power battle! Plus, both Sanji and Zoro’s attacks were ambiguous and all of us want to see what kind of new strength they are bringing to the table. I can’t wait to see Luffy and his crew head to the new world. They are definitely ready to stand with the best and take them down.